Reigning European hardcore kings – No Turning Back. Having previously released a slew of noteworthy material, including two albums under the belt of Bridge 9, the band is no stranger to the American hardcore/punk scene. The band has also logged countless miles touring the world, including support for modern contemporaries and legends alike – Sick Of It All, Hatebreed, Ignite, Gorilla Biscuits, Terror, and Bad Brains to name a few. Territory has never been hard to cover either. In 2010 alone, No Turning Back became one of the first ever European hardcore bands to hit China, Costa Rica, New Zealand and even South Africa.

On the band’s album “Take Control”, vocalist and leader Martijn Van Den Heuvel describes the album and meaning behind the title: “The record really is about us taking control not only as a band but also as individuals. This last year we had band members starting a van rental company for bands, a booking agency and even a workshop for custom built drum kits. The music and the lifestyle have become absorbed in our day to day lives. We feel Take Control is us documenting growing up and becoming adults while still remaining true to the ideals we had as 15 year old kids playing rudimentary music in our parents’ garage.”

With the release of “Take Control” on limited LP and digital formats, look for the non-stop work ethic to continue to be a driving force behind No Turning Back. 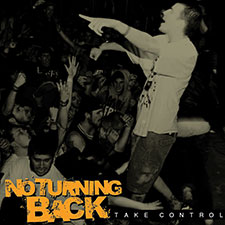