Turning Point were not afraid to break barriers and the diversity of their discography proves it. Ranging from the raw original demo in 1988 that still influences modern hardcore bands today, to the 90s-era that put the band at the forefront of the post-hardcore movement, Turning Point will always be remembered as sounding ahead of their time.

They had transcended their roots to become pioneers who were able to straddle the line between hardcore and more complex song structure and issues – all of which would influence a generation of upcoming bands throughout the mid-nineties such as Lifetime, Texas is the Reason, Farside, and The Promise Ring.

Out of press on vinyl for several years, Think Fast is proud to offer a revamped version of Turning Point’s seminal double LP discography including the original demo on a bonus 7″. Remastered for vinyl and features 9 tracks from the band’s WNYU radio show that were absent from the original release – 47 songs in all including a download card. Updated layout and packaging including a rugged gatefold jacket with tons of rare photos. Under exclusive license from Jade Tree. 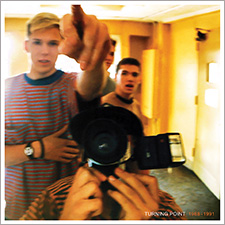