Hardcore touring machine This Is Hell is a band that has wasted no time. Upon the release of their first demo, the guys were racking countless miles across the world, booking their own tours, and playing to anyone with open ears. It’s this kind of dedication and enthusiasm that launched This Is Hell onto massive tours, including taking part in Sounds Of The Underground (supporting Gwar and Darkest Hour), touring Europe, and several other high profile tours with everyone from Strike Anywhere to Glassjaw.

In 2009 with the new release of Warbirds on Think Fast, This Is Hell showed no signs of slowing down. The energy of their previous releases was picked up a notch with a new found metallic element that’s complimented by production duties handled by legendary hardcore/punk producer Jim Siegel (Dropkick Murphy’s, Have Heart, Blood For Blood). Warbirds contains three brand new tracks as well as two covers to round out the release.

In 2010, This Is Hell signed to Rise Records and released Weight Of The World – Think Fast handled the vinyl version. The release marked the band chartering into crossover territory that was hinted at on Warbirds. Although not officially calling it quits, in 2012 This Is Hell released their fourth studio album via Rise and has since gone on hiatus. 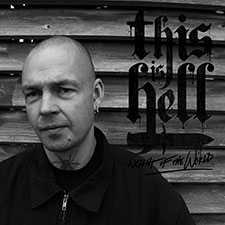