With the previous vinyl pressing of Heavy As A Really Heavy Thing nearly impossible to find on the after market, Heavy As A Really Heavy Thing has been in dire need of a repress. Our 2018 version is pressed on 180gram 2xLP vinyl with the 2006 remaster bonus tracks, and housed inside a sturdy gatefold jacket. Limited edition of 1000 copies on red and blue colored vinyl, under exclusive license from Century Media. 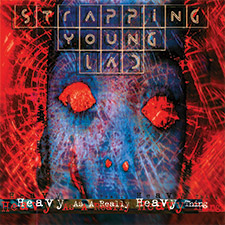